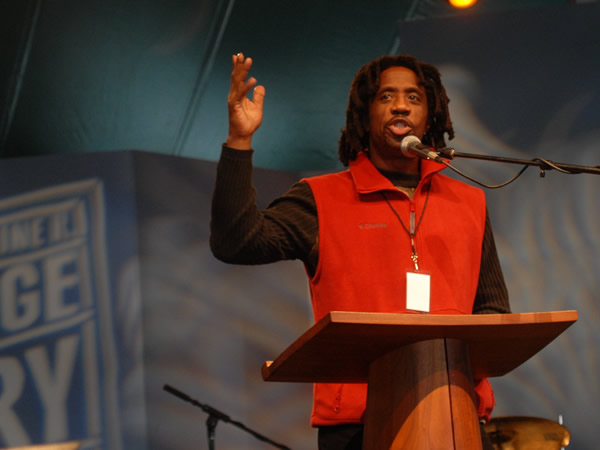 KURTIS LAMKIN is a contemporary American embodiment of the ancient West African griot tradition, which blurs the boundaries between poet, singer and storyteller.  When he performs, Lamkin often accompanies himself on the kora, a twenty-one-stringed West African harp-lute.  He not only composes on and plays the kora, but he makes them by hand.  This sense of the intimate bond between performer and instrument is also part of the griot tradition.  In the griot/bardic tradition, there is no debate.  The poet is seen as someone directly involved in the life of the community, and commentary on events that impact the community is not only accepted, but expected.  Like Lamkin, the griots and bards of the past always performed this function with biting satire and wit.  Lamkin has released a number of CDs of his work, including: My Juju (1995), El Shabazz (1998), Queen of Carolina (2001).  His newest CD is Kora Songs.

Click here to see our blog about Kurtis Lamkin.