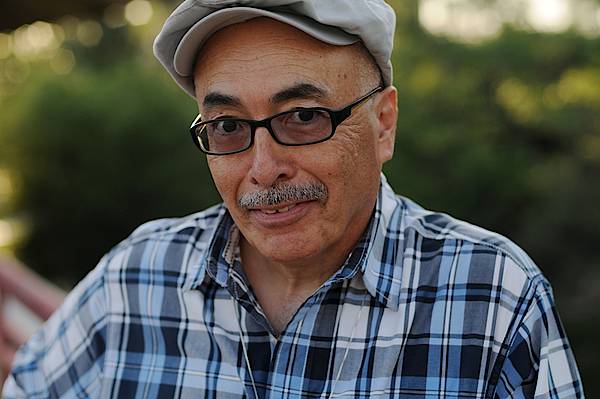 Juan Felipe Herrera was born in California to migrant farmers. He received a BA from UCLA, an MA from Stanford and an MFA from the University of Iowa Writers’ Workshop.

Herrera’s poetry collections include Notes on the Assemblage (2015); Senegal Taxi (2013); Half of the World in Light: New and Selected Poems (2008), recipient of the PEN/Beyond Margins Award and the National Book Critics Circle Award; 187 Reasons Mexicanos Can’t Cross The Border: Undocuments 1971–2007 (2007); and Crashboomlove: A Novel in Verse (1999), which received the Americas Award. His nonfiction work Portraits of Hispanic American Heroes (Dial) was published in 2014.

His prose children’s books include Calling The Doves (2001), which won the Ezra Jack Keats Award and Upside Down Boy (2006), which was adapted into a musical.

Herrera has received fellowships and grants from the Guggenheim Foundation, the Breadloaf Writers’ Conference, the California Arts Council, the National Endowment for the Arts, the Stanford Chicano Fellows Program, and UC Berkley.

He has won the Hungry Mind Award of Distinction, the Focal Award, the Latino Hall of Fame Poetry Award, a PEN West Poetry Award and the Robert Kirsch Award for lifetime achievement.

He taught at the University of Iowa Writers’ Workshop and UC Riverside and was chair of the Chicano and Latin American Studies Department at CSU-Fresno. He was elected a Chancellor of the Academy of American Poets in 2011.

Herrera served as California’s Poet Laureate (2012—2014) and, in 2015, was named Poet Laureate of the United States, the first Mexican-American to hold the position.

He has five children and lives in California with his partner, poet and performance artist Margarita Robles.