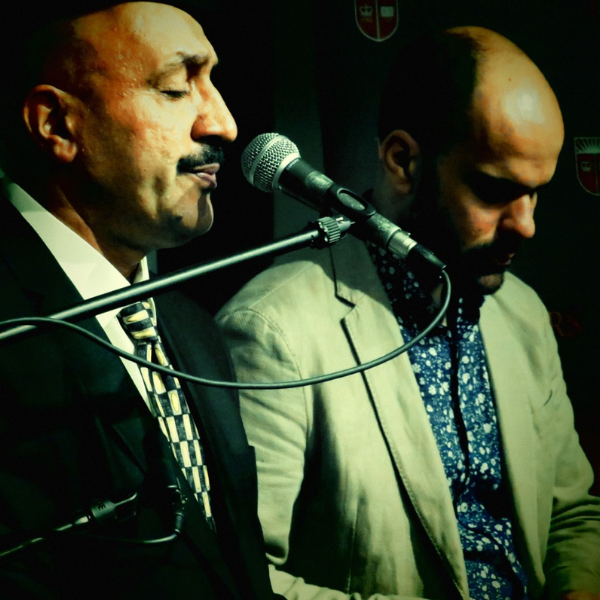 Maqam scholar, singer, artist and writer, Hamid Al-Saadi learned the art of singing and performing the Iraqi maqam from legendary musician Yusuf Omar. Hamid is the only person in his generation to have memorized and mastered all 56 maqamat from the Baghdadi repertoire and is recognized as one of the few vocalists keeping the maqam alive today, at a time when so many elements of this profound tradition are in danger of extinction. Hamid is also author of Al-Maqam wo Buhoor al-angham, a comprehensive text on the Iraqi Maqam and its poetry. Since 2018, Hamid has been based in Brooklyn, NY, and performs throughout the United States in addition to teaching a weekly class on Iraqi Maqam at Sarah Lawrence College. Through his powerful and highly ornamented voice, and in his comprehensive knowledge of the intricate details of the music and poetry of Iraq, generations and layers of the maqam tradition resonate through Hamid al-Saadi’s magnificent presence on stage.

Composer, trumpeter, santur player, and vocalist Amir ElSaffar has spent his career deeply steeped in jazz, Western classical music, and the Iraqi Maqam. In his composition and performance, he has pioneered a unique approach to combining these styles, which has earned him an international reputation and prestigious awards such as the Doris Duke Performing Artist Award and the US Artist Fellowship. Amir actively performs the Iraqi Maqam as a vocalist and santur player, and currently leads Safaafir, the only ensemble in the US performing Maqam in its traditional format. He also leads the six-piece Two Rivers Ensemble and 17-piece Rivers of Sound Orchestra, which combine the Maqam with jazz and Western classical music in addition to receiving commissions from a wide variety of ensembles throughout the world.

Inscribed in 2003 on UNESCO’s Representative List of the Intangible Cultural Heritage of Humanity, the Iraqi Maqam represents one of Iraq's richest cultural offerings. The maqam is a vocal tradition that has been developed and refined over the centuries by generations of masters in the cities of Baghdad, Mosul, Kirkuk, and Basra as well as in rural areas, who passed this highly sophisticated tradition orally in coffeehouses, royal courts, and salons. The maqam's sophisticated melodies are a direct reflection of Iraq's history, geography, culture, and folklore, and the sung texts of the Maqam represent some of the most important Sufi and secular poems from the Arab world over the past millennium.