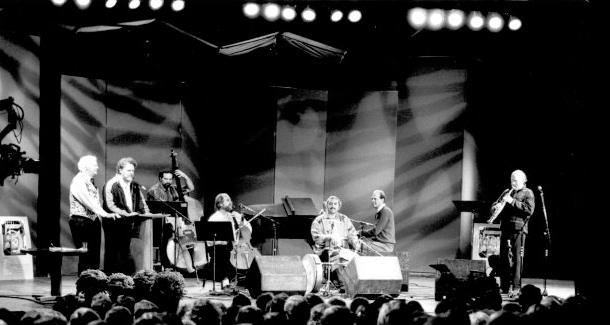 Since 1986, video camera crews have been a common sight at the Dodge Poetry Festival. Less noticeable, but equally important, have been the sound engineers making audio recordings of nearly every performance. More than 2,000 hours of audio and nearly 1,000 hours of video have been recorded for future audiences.

The recordings that comprise the Geraldine R. Dodge Poetry Festival Audio and Video Archive include Nobel and Pulitzer Prize winners, U. S. Poets Laureate, and many other poets of international stature captured in readings, interviews, conversations, and discussions, often in groupings that occurred in no other time or place.

What makes the audio and video footage in these archives so exceptional is that it was recorded by recognized industry professionals at the highest broadcast standards. There is simply no other archive of such scale and quality of twentieth and twenty-first century poets.

To date, only a tiny fraction of these archives has been made available to the public. We have launched our own channel on YouTube where you can view videos from the 2006 and 2008 Festivals: www.youtube.com/grdodge. To receive notices when new videos are posted, subscribe to our channel.

Extensive footage from past Dodge Poetry Festivals was featured in a number of popular PBS television series, including several hosted by Bill Moyers: Power of the Word, Language of Life, Fooling With Words, and Sounds of Poetry. Quite a selection of Festival footage is available on his website. Peabody and Emmy Award winning film-maker David Grubin also features a wide range of readings from the Dodge Festival in the PBS series Poetry Everywhere.

To ensure that this invaluable resource be preserved, protected, and shared, the Geraldine R. Dodge Foundation and Drew University have agreed to establish Drew University as the Academic Home of the Dodge Poetry archive by preserving it in Drew’s state-of-the-art archive facility.

Faculty and Students from Rutgers University’s School of Communications and Information were on-hand to log the recordings of the 2012 and 2014 Festival and are developing a prototype for an interactive website that would make a wide sampling of the archive available on-line.

Want to know more about our history?

Help Us to Preserve the Past

Become a Friend of the Festival and help us to preserve once-in-a-lifetime conversations and readings for future generations.