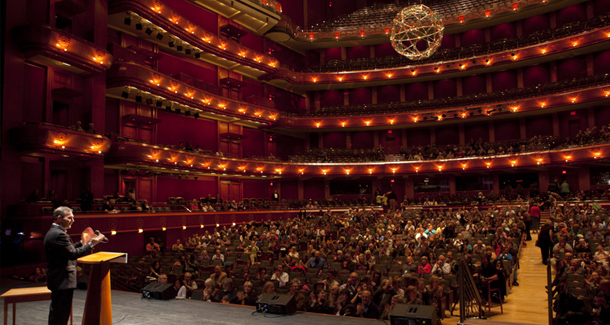 The Dodge Poetry Program was begun in 1986 as an initiative funded by the Arts and Education Programs of the Geraldine R. Dodge Foundation. A series of poetry in-service days for New Jersey teachers evolved into the idea for a Poetry Festival. Advisory committees of teachers and poets (including Galway Kinnell, Stanley Kunitz, and Kenneth Koch) met with then Foundation Executive Director Scott McVay and the Poetry Program’s Founding Director James Haba to plan the 1986 Festival. These plans immediately expanded to include poet visits to New Jersey high schools.

Since then, there have been seventeen biennial Dodge Poetry Festivals, which now routinely attract audiences of 14,000 to 17,000. The Festival is the largest poetry event in North America.

In its history, the Dodge Poetry Festival has involved over 500 Festival Poets, including Nobel Laureates, individual state and U.S. Poets Laureate, Pulitzer Prize winners, and an array of poets from diverse cultures and subcultures here and abroad.

The Festival provided the substance for 25 hours of national PBS television programming seen by more than 50 million people, including more than 20 hours with Bill Moyers and two Emmy-winning programs. Series include The Power of the Word (1989), The Language of Life (1995), Poetry Heaven (1998), Fooling With Words (1999), and Sounds of Poetry (1999).

In addition to producing the biennial Festival, the Dodge Poetry Program sends poets into New Jersey high schools to work with students and teachers. There have been over 500 one-day Poet Visits since 1986.

Poet Visits have evolved into Mini-Festivals (modeled after the biennial Dodge Poetry Festival) at nearly a dozen host high schools spread out across New Jersey. Some of these Mini-Festivals draw students from 2 to 12 high schools to the host school.

Marie Howe’s “Part of Eve’s Discussion” captures a moment when the world changes irreversibly. We have felt somewhat suspended in such a moment for nearly two years now, and st...

Poets (left to right) Joy Ladin, Paul Tran and Natalie Scenters-Zapico at the 2018 Dodge Poetry Festival. Photo by Alex Towle.It feels like just yesterday that we wrapped up the 2020 Dodge Poetry Fest...

Read More
In This Section